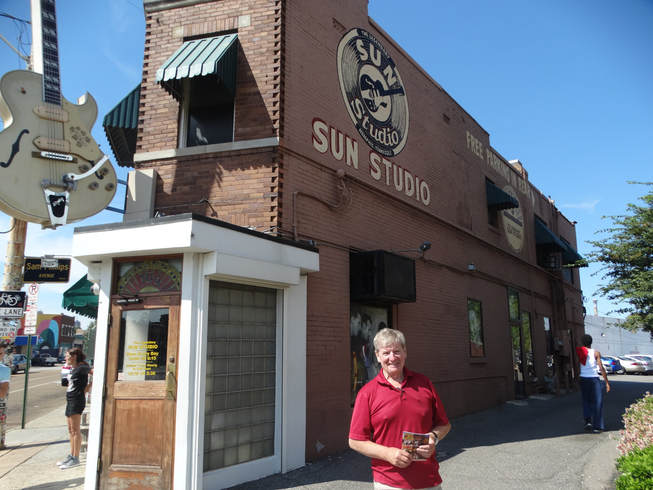 
​We are soon back on Interstate 30.  A sign flashes past: "Medicare is fraud, don't be a victim."   Then we are passing Little Rock and turn on to Interstate 40 and are now travelling east and before I realise it we are crossing the Mississippi (for the second time) and we are in Memphis, Tennessee.  We flounder around in the centre for a while, where it doesn't seem very busy, stop by Overton Park, near the city centre, and study the street map. Eventually we find our way to the eastern end of Beale Street and Sun Studio where Elvis made his first record and where his musical career was launched.  Here too Sam Phillips helped to launch Jerry Lee Lewis, Johnny Cash, Roy Orbison, Carl Perkins.

Cyril parks the car by the curb and I pick up my camera.  The building is old, old for the United States, I mean.  Must be1930?  Red brick.  A large guitar hangs over the pavement.  A green plaque gives a short history of 'Elvis Presley and Sun Records.'  Green sunshades hang above the large windows.  The place looks… not ramshackle, nor neglected, but it hasn't been "done up" or glamourised.  It looks much like I imagine it looked when ​
Elvis first walked, nervously, through the door wanting to make a record for his mum's birthday.   A man sees me taking photographs and and asks where my car is, I point down the street. C is sitting in it waiting for me.   The man tells me we should move it to the back of the studio as there are restrictions where we have parked. We take his advice and move the car to the small car park behind the studio.  We both walk to the front again and take more photographs.

Then we go in, through the corner door.  Inside is a kind of snack bar, there are four or five people standing around looking at posters on the wall, a couple sitting by the counter drinking coffee, there are tables with bench seats by the window.  A black woman, in her sixties, is sitting by the door, "The next tour of the studio in fifteen minutes, get your tickets here." She shouts. We give her $26.  She makes jokes and laughs as she hands the tickets out.  The interior is a little ramshackle and I'm already having doubts about it all.  What do we get for our $26?

A late middle aged woman, english, with a cut glass accent, asks me to take a photograph of her and her husband, which I do.  More people come in, so now there are 12 or 15 of us.  All in our sixties and seventies apart from one young couple who are in their twenties.