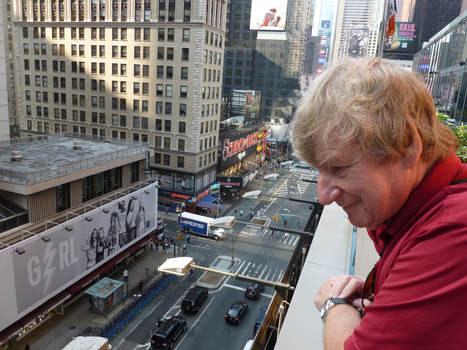 The sound of police car sirens accompanied by the 'whah-whah-whah' of a fire truck wakes me. Through the window I can see buildings, tall, some with lights shining through the windows, a neon advertisement in the distance, the muffled rumble of traffic.  For a  couple of seconds I wonder where I am.

We finally got here at 3 am after a delay at Gatwick of over four hours.  We took off at 9 pm having boarded a Boeing 737 - 800 series (it was supposed to be a 'Dreamliner') and learning our flight was to be via Reykjavik.  We weren't told why this alteration to the schedule had taken place though rumour  had it it was something to do with the crew running out of hours and the only way to get us to New York was to change crews in Iceland.  Never mind.  I can say I have been to Iceland now. Even if my only experience of it was through an aircraft window. It was pouring with rain. 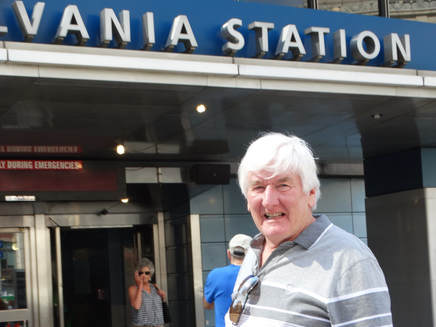 We decide to check out Penn Station where we catch the train to Chicago tomorrow. It is on 34th Street within walking distance.  On the way countless vendors assail us trying to sell a variety of services: ‘Bus tours of the city, theatre tickets, cheap souvenirs, collectors for the homeless, and, for all I know, ladies of the night. We brush all of them aside.  There are many beggars sitting on the pavement, silently, with cardboard signs roughly written: ‘I am homeless, have no job, can you help me?’ And one, I noticed, a young girl of no more than twenty or so: ‘have left home.  Abusive father. Need help.’  There were others, in similar vein.  But, like ninety-nine percent of us, we ignore them, feeling a little guilty.

​So sad to see people, most of them under forty, begging for pennies surrounded by the trappings of the richest country in the world.  All around us, as we walk, rapidly tiring in the heat, are spectacular advertising walls showing clips from the late night TV talk shows, or forthcoming sports events; beautiful women, with so white teeth, immaculate hair, and devastating smiles, talking silently down to us. Be like us, they say, well off, successful. Famous. But it’s not for the poor here, sitting on these hot pavements in New York City. Begging for pennies. 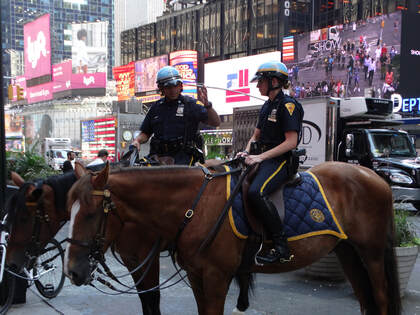 ​
​The video’s clarity is outstanding and really impressive. We push through the crowds in Times Square; I take photographs, a couple of them of policemen on horses that I decide Toni will like to see.  We reach 34th Street and find Penn Station.  It is next door to, or part of, or underneath – I’m not sure which – Madison Square Garden.
​​
We spend a few minutes looking round the place.  It’s just as crowded here as the streets outside, except the people here, rushing back and forth, have a more determined look on their faces. They know where they are going and need to get there now.

Back on Broadway we succumb to one of the vendors, big, black, twice my size, friendly, sweating heavily in the heat, and buy tickets for a bus tour of the ‘Downtown’ area which includes ‘Ground Zero, and the memorial area that Heather asked me to make sure we visited.  The bus is open- topped and we are given small plastic earphones for the commentary. It is good, interspersed with various songs about New York:  ‘New York, New York, it’s a wonderful town, the Bronx is up and the Battery’s down and people ride in a hole in the groud.’
​ 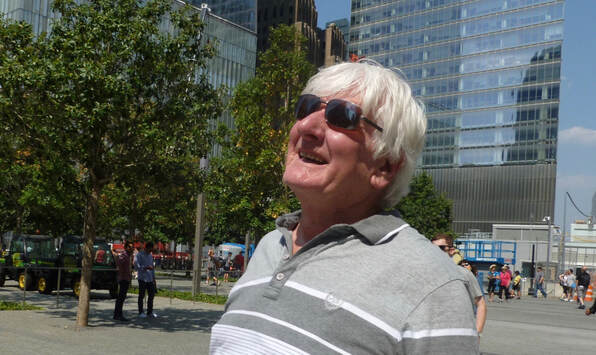 We get off near the 9-11 memorial.  Heather and I were in New York 2001 and went to the top of twin towers, it was six or seven weeks before the attack, but I don’t recognise anything.   There is building work going on all around; tall cranes on the skyline, fences around construction sites, the sound of hammering and drilling accompanies the murmur of hundreds of voices all to the background hum of traffic.  Signs lead us to the memorial, a wall surrounding the site of one of the towers and within it a water feature.  The wall has all the names of those killed carved in to it.  A 9-11 museum is nearby for which there is a charge of $25 - $18 for senior citizens.  A shame they need to charge to see an exhibition of such a horrendous event, though the queue to see it is very long.
There are thousands of people here; no doubt the good weather is helping to swell the numbers.     Photographs are taken including shots of the new World Trade Center, which is spectacularly high and impressive.  We walk down to its entrance but it is not open to the public yet so we can’t go inside. Then it is back on to one of the tour buses – the ticket allows us to ‘hop on hop off’ and the one we board now has a tour guide with a mike and he points out various places of interest and gives us their history. He seems to be a film fan as he keeps pointing out where scenes of famous – and not so famous – films were shot. “Part of the chase in the ‘The French Connection’ was filmed in this street.”  Did anybody see ‘The Taking of Pelham 123? Some of it was shot on that bridge.”

The ‘bus winds its way past Wall Street, through China Town.  The traffic is heavy, we keep coming to a halt and progress is slow but eventually we arrive back in the Times Square area and walk through the crowds and the searing heat (it must be in the 90s) to the hotel.
​
​We both sleep. ​